Gary Hall Jr. and his sister take a swim in the Keys

Got to hear this wonderful story from Gary Hall Jr. at the NDPA (National Drowning Prevention Alliance) meeting held in New Orleans in 2019. See https://NDPA.org. The event was put on Facebook, so I understand, with a livestream. Can watch now or later.

He talked of the time he and his sister had to fight a shark.

Also, a great story of his pre-race routine, and his iconic Red, White and Blue robe, especially as he made a statement at the ‘94 Games. Classic stuff.

American swimmer Gary Hall Jr., inducted to the Arizona Sports Hall of Fame, class of 2018 is a
10-time Olympic medalist including 5 gold medals. He’s one of only two swimmers in history, male or female, to successfully defend an Olympic title in the 50 free, winning gold in 2000 (tied with Anthony Ervin) and again in 2004. He also won 6 World Championships in long course, 4 Pan Pacific gold medals, and a Pan American gold.

His keynote session during the #NDPA2019 Educational Conference was Monday, April 15, 2019.

Blood in the Water

While spearfishing in the Florida Keys, Olympic gold medalist swimmer Gary Hall Jr. bagged a snapper weighing more than 15 lbs. “I wanted to eat this one for dinner,” says Hall, 31, who was out that day with his sister Bebe, 28. But the Halls weren’t the only ones delighted by the catch—or who had food on their minds. Looking around, they spotted a blacktip reef shark prowling below. “My heartbeat is going a million miles an hour,” says Bebe, who helps run the swim academy in Florida founded by her brother. “I said, ‘Gary, drop the snapper!'”

But Gary, an experienced spearfisherman, insisted they could make it back to their boat 250 yards away. With blood from the snapper dripping into the water, another reef shark, this one about 6 ft., suddenly bit Bebe on the arm. Then it turned on Gary. “It was in a frenzy mode, with its back arched, and it was thrashing,” he says.

Bebe recalls thinking, “If he bites him right now, I’m going to be looking at the inside of my brother’s stomach.” Instead the shark again turned toward Bebe, who had reloaded her speargun. As the shark attacked, jaws open, she took aim. “It felt like it swam right up onto my spear,” she says. “I made sure I got it inside the jaws, and then I let go of the sling. I could feel it hit the back of the shark’s throat.” The blacktip, streaming blood, swam off.

Frightened at the time, Gary was later philosophical: “Life is as exciting as you make it,” he says. “I’d much rather die by shark attack than in some nursing home.”

Pre-Meet Speech at Univ of Michigan 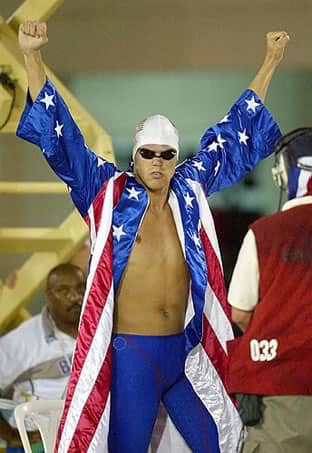 Gary Hall Jr at the podium at the NDPA event in New Orleans.