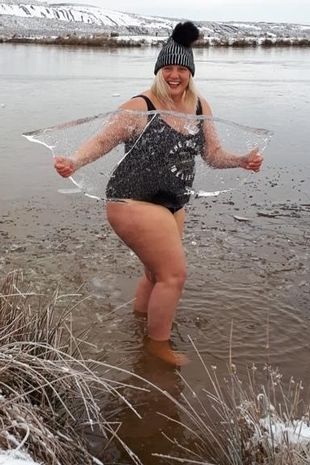 Cath Pendleton holding a slab of ice at a swim spot.

Cath Pendleton from Merthyr Tydfil, in Wales, holds the world record for swimming in the ocean off the icy wastes of the South Pole and even gets in a chest freezer to train.

Cath Pendleton is an NHS worker swims in the ocean off the frozen South Pole. (Image: BBC)

By Robin Eveleigh from Aug 2021

While most of us pine for sunshine, Cath Pendleton finds the summer months a constant source of angst.

For the NHS worker from Merthyr Tydfil in Wales is the unlikely holder of a world record for swimming in the ocean off the icy wastes of the South Pole.

So when balmy summer temperatures upset her training regime, she is forced to resort to her secret weapon – a chest freezer full of ice water in her garden shed.

“I can’t stand getting in that freezer,” says the single mum-of-two.

“But our rivers aren’t cold enough in the summer, so it has to be done. This is my grumpy time of year – I’m at my happiest in a chilly pond or lake in the depths of winter. Ice swimming is my reset button. I absolutely love it.”

Cath’s record-breaking swim in the Antarctic Circle features in BBC documentary The Merthyr Mermaid showing on Tuesday evening on BBC1 as part of the Our Lives series.

Braving leopard seals and killer whales – in waters just three hundredths of a degree above zero celsius – she bagged the record for the most southerly swim of 1km-plus by a woman.

Now the 49-year-old has set her sights on duplicating the feat on the other side of the planet, inside the Arctic Circle.

Cath’s incredible journey from the Welsh valleys to the coldest continent on the planet began six years ago after she injured her back at work.

It meant the keen amateur triathlete had to give up running and cycling, and instead turned her love of the outdoors to wild swimming.

While training for an ice swimming event in the Lake District in 2016, she discovered a passion for plunging into the coldest waters she could find.

“You feel absolutely freezing when you get in,” she says.

“Your hands feel like they’re being crushed by a vice. I sing Club Tropicana until my body acclimatises, then I’m just in the moment. I’ve got a very busy head, but when I’m swimming, all I think about is my body, my breathing and my stroke. Nothing else matters.”

After one of Cath’s first ice swims – at a beauty spot in the hills above Abergavenny – she lost the sensation in her fingertips for three months. Undeterred, she went on to swim the Channel in 2018.

She was picked to join team GB at the world ice swimming championships in Russia in 2019 – winning a bronze in her age group.

Cath, who works as a smoking cessation adviser, recalls: “The water was so cold that ice would form between races, so they had to keep turning it over to stop it freezing.

During one of her first swims Cath lost the feeling in her fingertips for three months ( Image: Daily Mirror)

“Some competitors had to be stretchered away after the 1km event. I was definitely hypothermic, but I go the other way. I feel high when I come out of the water, I love everybody!”

Cath – mum to Danielle, 22, and Beth, 19 – got wind of an expedition to Antarctica being led by Irish ice swimmer Ger Kennedy. “I raided the cupboard under the stairs for stuff to sell and put the money in my Antarctic dream fund,” she says.

She secured sponsorship for the £10k trip, but as Britain sweltered through the summer of 2019, Cath had to fork out £50 on a second-hand freezer to take regular ice baths in.

What is happening where you live? Find out by adding your postcode.

Cath recalls: “My partner Rob Blanchard had to rebuild the shed around it. I’d sit in it for a couple of minutes at a time at first and worked my way up to 20. But it’s not my favourite thing. I don’t even like taking cold showers.”

In February last year, Cath set sail from Ushuaia on the southern tip of Argentina for a choppy six-day crossing to Hanusse Bay in Antarctica.

Cath adds: “My biggest fear was getting eaten by some of the wildlife. I’d been to Northumberland to swim with the seals, just to get used to the idea of animals in the water with me.

Cath says she sings Club Tropicana until her body acclimatizes to the cold ( Image: DAILY MIRROR)

“Then on the day of my Antarctica swim, a huge pod of 30 orcas appeared next to the ship. I didn’t dare look at them and we had to divert my route because they’d disturbed so much ice.

“I was taken a mile out to sea on an inflatable boat and had to swim back from there. I remember jumping into the most amazing blue water, smiling in my head and being so full of adrenaline that I didn’t even feel the cold.”

She says: “I felt wonderful afterwards. I’d have done it all again the next day if they’d let me.”

Cath’s garden shed has now been transformed into an “ice palace” complete with chandeliers as she trains for her next challenge.

Her ultimate goal is to complete the Ice Sevens – swimming a mile in waters below 5 degrees celsius in each continent - but in the meantime she hopes to head to the Arctic and bag the most northerly female swim.

Cath adds: “I believe it would make me the first in the world to swim a mile inside the Arctic and Antarctic polar circles. Not bad for a single mum from Merthyr. I might not look like an athlete - but looks can be deceiving.”