I was born in East Orange, NJ, in 1962, a predominantly black town.

My father was an Army veteran and taught me how to swim when I was 5-years and 6-years old. My father was also a member of the Orange YMCA back in the 1970s, and he used to bring me with him on Mondays -- It was father and son night. And I loved being in the water and being with my dad who was a competent swimmer.

That turned into the Saturday morning swim classes were I learned the different strokes.

I was noticed by the local swim coach who wanted me to join the swim team at the Y and start going to swim practices a few times a week, and by the time I was 8-years-old I started competing for the Orange YMCA.

Parents divorced an my mom remarried in 1973.

I swam on the Orange YMCA team until we moved to Livingston.

Moved to Livingston in 1975 with mom and stepdad. Livingston, NJ, was:

Riding the school bus to Heritage Jr High was extremely intimidating, at 13, being stared at and with negative comments being made. Amen for David Fisher -- who I had played little league baseball with in town and who sat next to me on school bus. We got on at the same bus stop. Thank goodness it was a short ride to Heritage Jr High School. Then I took another short bus ride over to Newark Academy.

Only 3 black kids in my grade at Newark Academy (NA) but I was “only one” from Livingston.

I played three sports at NA: soccer, swimming and baseball. And, I was the “only one” in all three sports. Yes, I was a good athlete.

Newark Academy raised its tuition after the 9th grade, and I had to transfer to Livingston High School for grades 10th through 12th.

I was the only African-American in my class all three years. And, by my senior year, I was the “only one” in the entire school.

Yes, the Benjamins were brothers and were soccer players at Livingston, and friendly to me. But there were only three of us out of  1,800 kids. It was difficult being African-American in an all white world.

I played three sports at Newark Academy, soccer, swimming, and baseball. Because NA was a private school there wasn’t much competition making the teams for those sports. So, when I transferred to Livingston High School, I decided to only do one sport which was swimming, an all white sport.

The town of Livingston, when it came to sports, was very political, biased and racist.

Meaning, at the time, when you got to the high school, the coaches already knew who was going to make the varsity team in any sport. And I knew. Being the “only one” that the politics of an African-American kid coming over from a private school to a large High School to play soccer and baseball would be problematic. The competition of making a varsity squad was quite competitive, political and racist. I knew these coaches would never play me in the field, and I’d be sitting the bench all three years.

Swimming was a different story.

I was quite talented from such a young age and could swim all four strokes (backstroke, breaststroke, butterfly and freestyle) very well and fast. 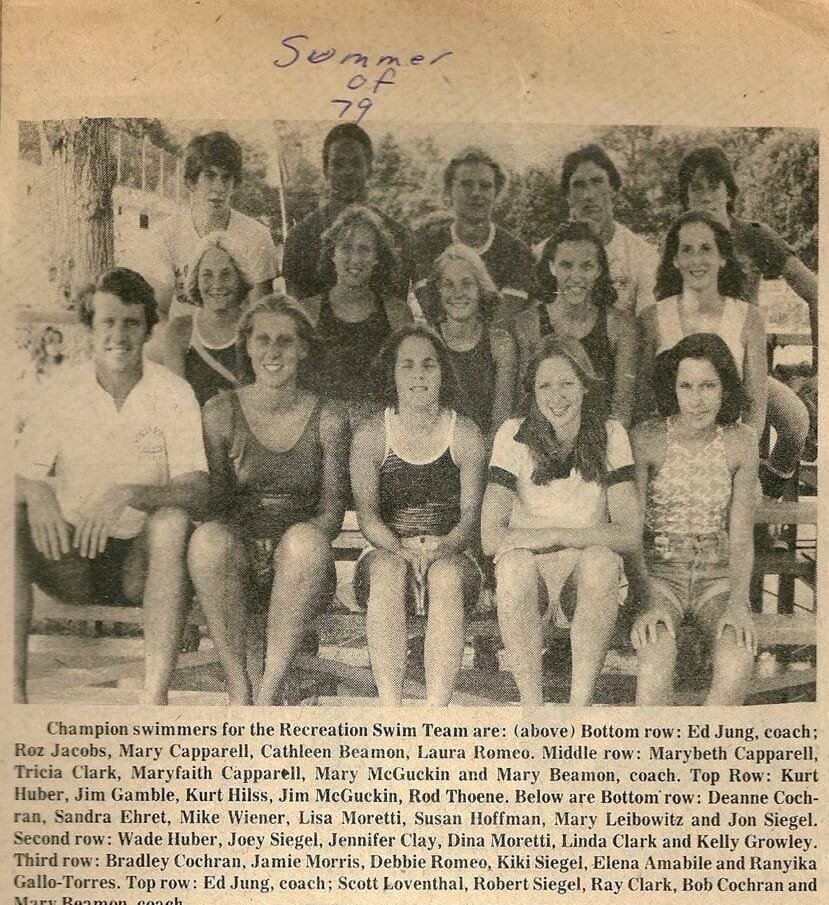 Summer Swim Team's photo in the local newspaper, 1979. (Click for a larger view.) 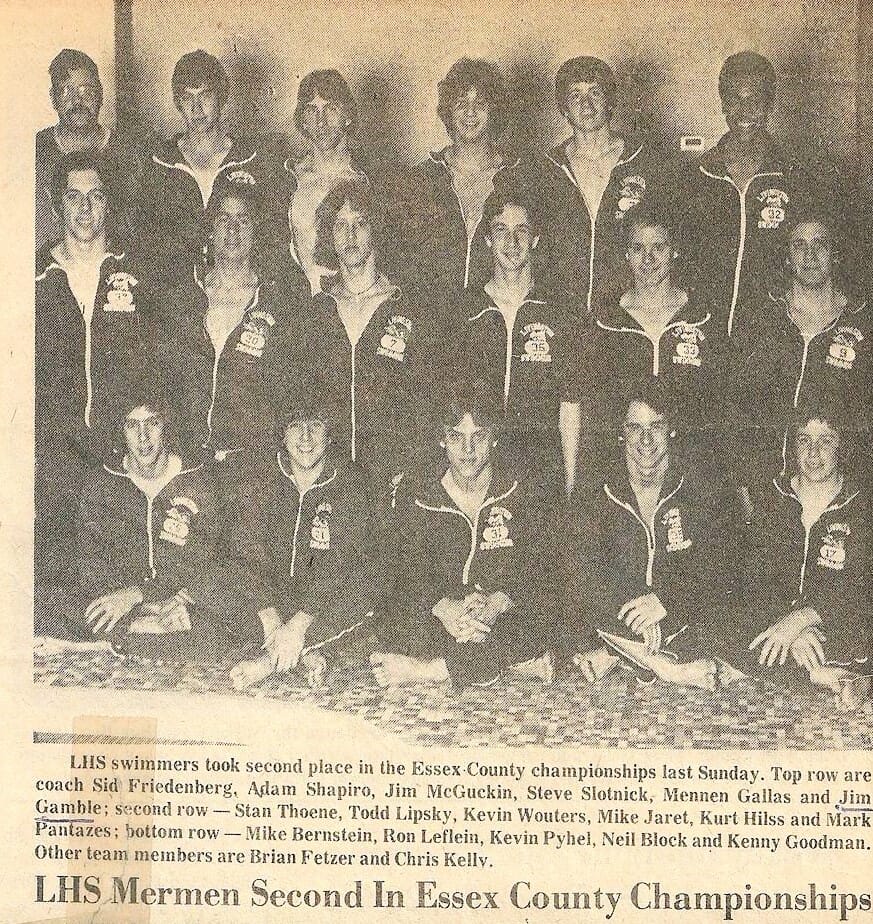 Newspaper photo of LHS after districts with Jim-Gamble.

In the Township of Livingston, they had two outdoor pools. One on each side of town. They had an outdoor 25-meter pool (Memorial Pool). And, they had a 50-meter pool (Northland).

In the 9th grade at Newark Academy I made the varsity swim team and was very competitive being the “only one.” I was also the first-ever African-American male-swimmer at Newark Academy, but there was a female who was before me.

In grades 10, 11 and 12, I also swam for my local YMCA during my High School swim season, and I did quite well, being the “only one.” I was also the first ever African-American on my YMCA team. 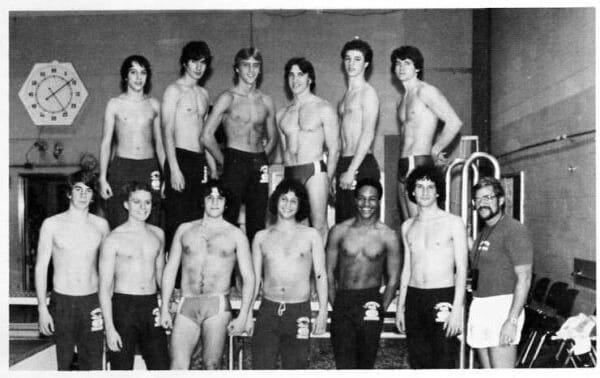 I was swimming ALOT and year round. At the high school and college level, swimming is a winter sport. But it is also a summer sport as well.

I was constantly practicing and constantly competing from the 10th-12th grade. Did ALOT of eating and sleeping too. Not much of an outside social life either.

My freshman and sophomore years, our Pitt team was Eastern Atlantic Champions, and my junior and senior years, Pitt was Big East Champions. 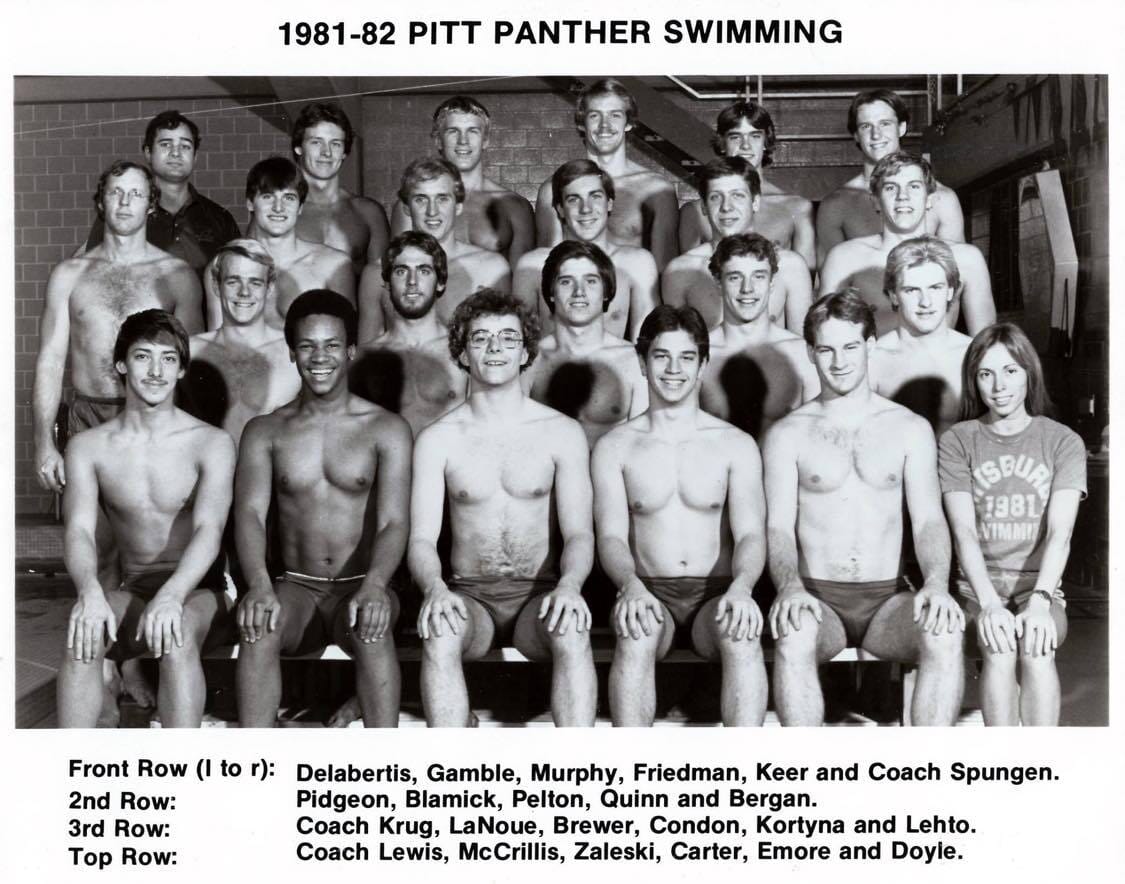 Swim and Dive Team at the University of Pittsburgh. 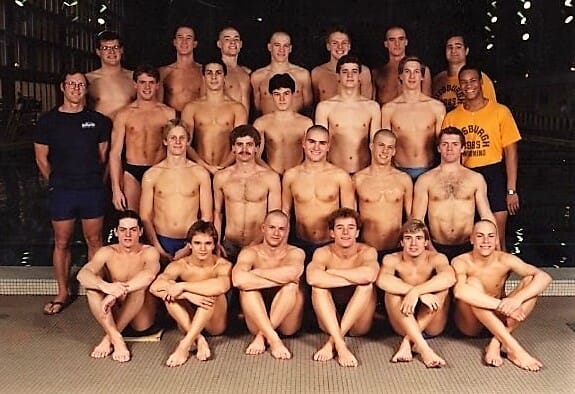 This story is not about my swim career which was a good one, the story is about being the “only one” and what it was like and how difficult it was growing up while doing a sport which is all white to this day.

Random Negative Thoughts From Past

I have no idea what my life would have been like if it wasn’t for the sport of swimming. Thanksfully I had the support of my mother and father. But I have come to understand that the sport molded me into the person I am today.

I took that negativity and turned it into fuel and used that rage to make me swim fast in the water. I guess swimming was an outlet as well as a therapy session.

I didn’t allow the negativity to stop me from pursuing my goals whether it was in the pool or in life.

Some people ask me what my superpower is?

I tell them all the time my superpower is resiliency, and the fact that I’ve been able to sniff out people who are racist.

HOPEFULLY, my story will be seen by everyone in swimming and outside of swimming. I want to share my story with the following:

We need more inclusion in the sport.

The best way to inspire change, is to be the change.

Being a black man or a black woman in the pool is difficult. I hope that continues to change. I’m so proud to see so many African Americans doing well in the pool, long after my career has ended. Cheers to USA swimmers, Cullen Jones and Simone Manuel, first ever African-American gold and silver medalists in the Olympics. 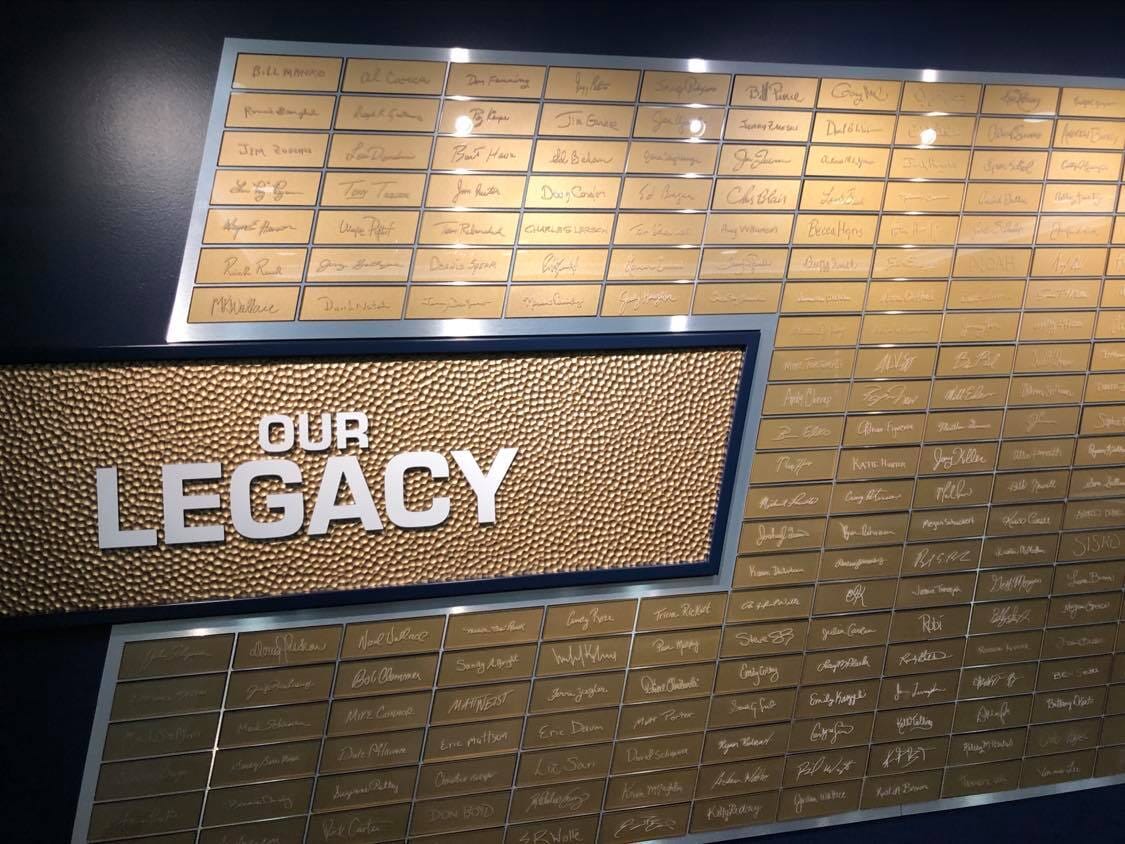 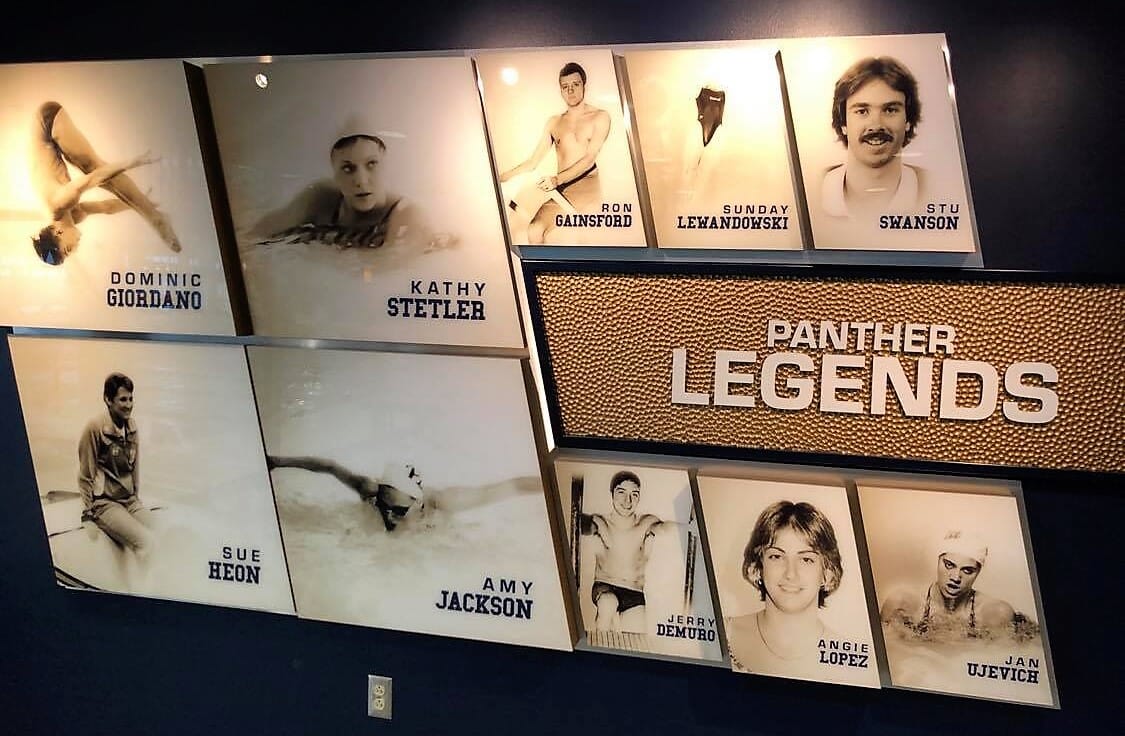 Photos of some of the Swimmers and Divers on the Pitt Legacy Wall. 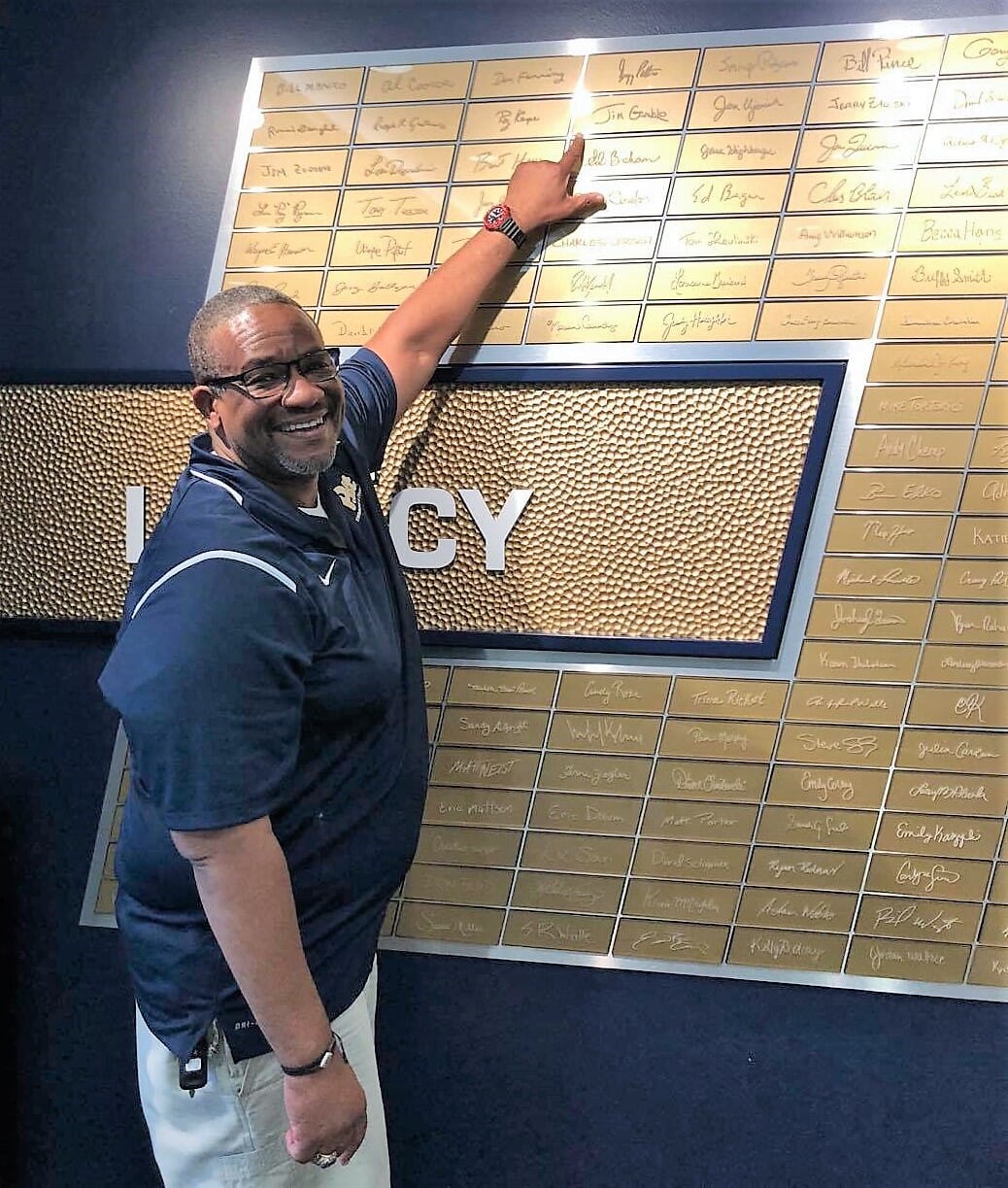 A more recent photo showing Jim pointing to his spot at the Pitt Legacy Wall. 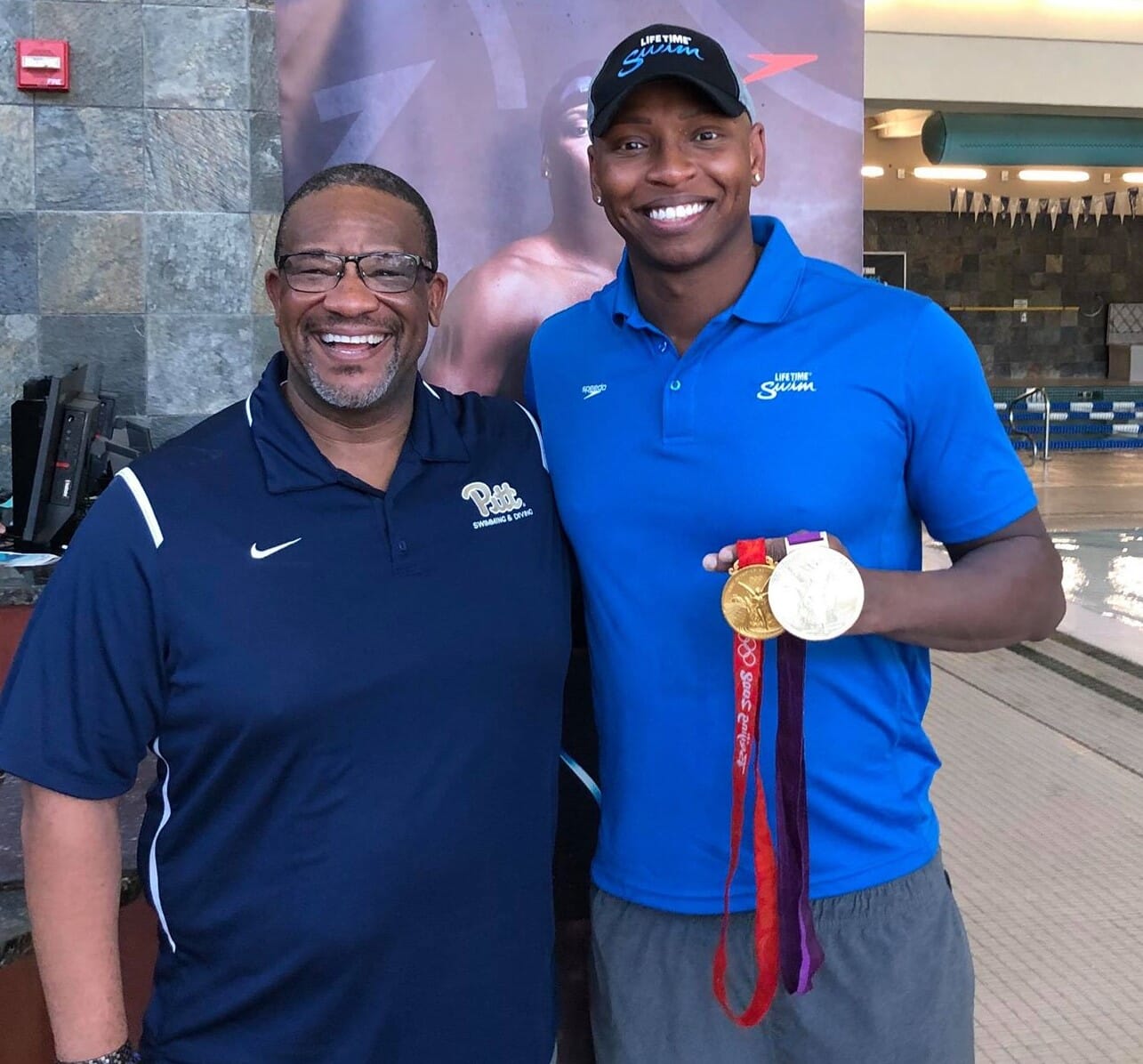 It was such an honor finally meeting him in person. Both of us are from New Jersey and both from Essex County. I had been following his swimming career. He was born 4 days after my swim career at the Univeristy of Pittsburgh had ended in 1984.

I would like to give special thanks to Tara Kollmar for encouraging me to do my story. Harlan Coben for his input and helping me getting started with the story on paper.

Top of page in the site, Swimming World. Click image to go to the story. Podcast appearance with Jim Gamble and John of Fluid Mechanics.

Snow is water. Winter sport, safety, avalanche off of a roof! 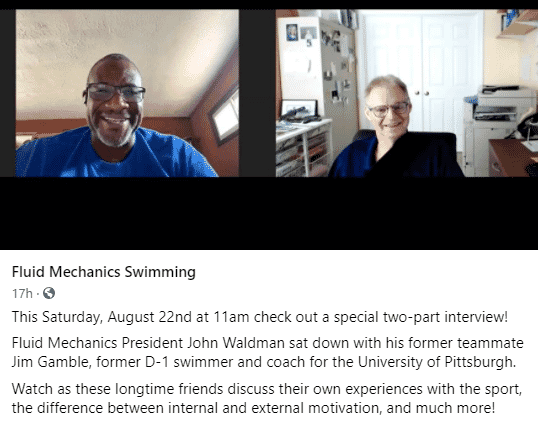