Way to go Olivia and way to go Post-Gazette for getting it right! 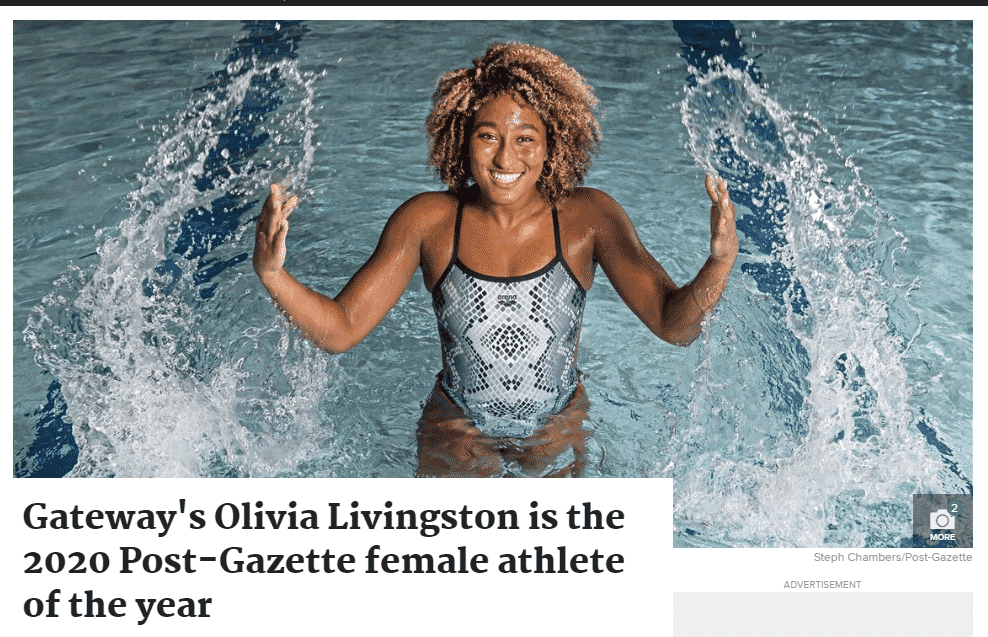 Article about Olivia in the P-G

A lot of kids dislike vegetables.

“When I was super young, I hated water,” she said. “I would scream and cry. I wouldn’t want to get in the water. I don’t know what happened. I didn’t even want to take a bath.”

Wouldn’t you know, Livingston and water have become nearly inseparable, so much so that this bubbly teenager and recent Gateway High School graduate spent the last four years making waves as one of the most accomplished high school swimmers in WPIAL history.

Livingston keeps her swimming medals on a shelf in her bedroom. At this point, that shelf is probably so heavy that it’s ready to collapse. Livingston certainly didn’t collapse her senior season, winning gold medals in the 50- and 100-yard freestyles at the WPIAL Class 3A championships for the fourth year in a row. By doing so, Livingston became only the second girls swimmer to claim eight individual WPIAL titles in their careers. She also collected three career PIAA gold medals.

This season went swimmingly for Livingston, who has been selected Post-Gazette Female Athlete of the Year. The award takes into consideration all WPIAL and City League athletes. The 5-foot-11 Livingston is the sixth girls swimmer to earn the honor since the award began in 1979.

“It means so much because I worked so hard, and even going into ninth grade, I didn’t know I had the potential to do what I did,” said Livingston, who will swim at Louisville this fall.

Livington’s success has come as little surprise to her high school coach, Sherry Sonetti, who has known Livingston since she was 10, two years before she began swimming competitively.

“You kind of know sometimes when a kid is going to be good. She was one like that,” Sonetti said. “She was always a great listener and picked things up very fast. Every little technical thing, she had it.”

Livingston has idolized Simone Manuel, who at the 2016 Olympics became the first African-American woman to win an individual Olympic gold medal in swimming. Livingston said that even when she goes to national meets, she can count the number of African-American swimmers on one hand.

“Being in a sport where there’s not much representation, having someone to look up to means a lot and helped me realize I could accomplish a lot, too,” she said.

Livingston is now trying to do the same for others, just like Manuel did for her.

“I really hope that I am inspiring people because that’s what I really want to do,” she said. “I want people to look up to me like I do to Manuel and [Olympian and former Oakland Catholic star] Leah Smith. It’s really important to have people like that in the sport.”

This teenager from Monroeville who would watch “Finding Nemo” each day after preschool found her sport when her mom signed her up for a summer swim team when she was 8. But it wasn’t until the summer before her freshman year when Livingston realized she could potentially go far in the sport. That’s when she started training daily at the Jewish Community Center in Squirrel Hill. The JCC Sailfish is run by legendary coach Al Rose and assistant John Lynch.

“She had a lot of raw talent. She was still learning and she still is,” said Rose, who has been training swimmers for more than 50 years. “You knew she had the talent to be good, but I think her best days are going to be coming when she gets to college.”

The only damper on Livingston’s senior season was that she was not able to four-peat in the 50 freestyle at PIAAs, as she settled for fourth. In the 100 freestyle, she was fourth in preliminaries, but the COVID-19 pandemic forced the meet to be shut down before the final. She finished with eight career PIAA medals.

“It was disappointing at first, but I was also happy that we all stayed safe,” Livingston said. “I have so much to look forward to in college, and that’s the most important thing to me.”

When it came to colleges, Livingston had a lot to pick from. An outstanding student who finished sixth in her class with a 4.3 GPA, Livingston took official visits to California, Louisville, N.C. State and Notre Dame. She ultimately picked Louisville, making longtime Cardinals coach Arthur Albiero one happy man.

“Without knowing [a recruit], we look at a certain profile. Her versatility and her success in certain events gives potential for immediate impacts in relays,” Albiero said. “We put a premium in recruiting those who can make an immediate impact. That was the initial part. Once I talked to her a few times, I loved her personality and I loved her attitude. And when she visited, I loved her family.”

Livingston said she hopes to qualify for next year’s Olympic Trials, and one of her long-term goals is to make the U.S. National Team. But for now, she’s focused on training, which for the past few months has come mainly in her backyard.

Not long after the pandemic began, Livingston’s parents bought a pool. It’s 15-feet in diameter and 3½-feet deep. Livingston ties a bungee cord around her waist, which is attached to pole behind her outside of the pool, and then swims in place.

These days, nothing, it seems, can keep Livingston and water apart. 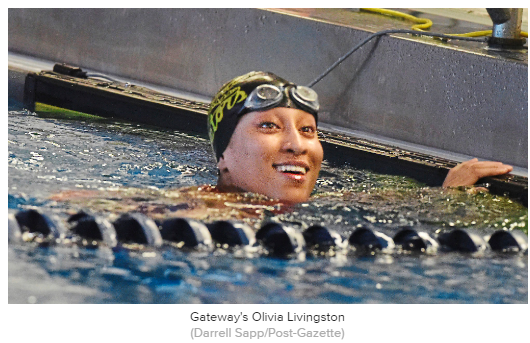 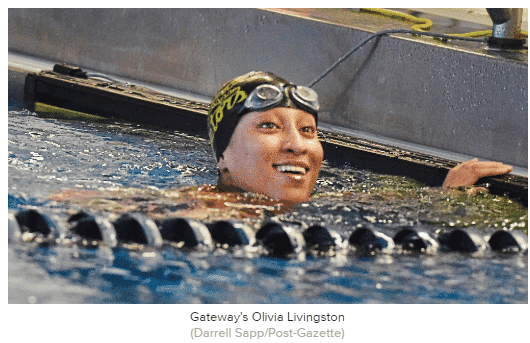