Swim to the island. Open water swim in Senegal. 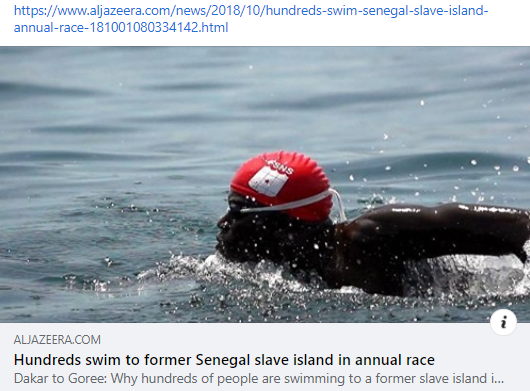 Why hundreds of people are swimming to a former slave island in Senegal.

Hundreds of swimmers have been taking part in a race between the Senegalese capital, Dakar and Goree Island.

But it's no ordinary competition. It involves swimming five kilometres to a former slave port, where Africans were once sold and shipped off to slavery in the Americas. The race is a tribute to slavery's victims who remained defiant and tried to swim, often in chains, for freedom.

I have had the pleasure of visiting Senegal, Africa. During my visit I took the boat ride from Senegal to Goree Island.

One of the most AMAZING thing I saw during the boat ride to Goree Island was the Young African Kids (9, 10, 11, 12+ YOA) who swim in open Ocean from Senegal to Goree Island. That's 1.2 miles of open ocean swimming.

They visit and enjoy seeing the tourist from all over the world. After a day on the island, the kids swim the 1.2 miles back home.

NO Lifeguards, NO Safety Boat, NO Floatation device.