The late Brian Piccolo was born 79 years ago today. A 1961 graduate of Central Catholic High School in Fort Lauderdale (now known as St. Thomas Aquinas High School), Piccolo is one of football’s most inspiring stories. Although he was an outstanding football and baseball player in high school, Piccolo’s only scholarship offers came from Wake Forest and Wichita State. He chose Wake Forest and went on to an outstanding career. During his senior year in 1964, Piccolo led the nation in rushing and scoring and was named Atlantic Coast Conference Player of the Year. He was selected to play in the North vs. South Shrine All Star Game at the Orange Bowl. But despite a tremendous college career, Piccolo was ignored by the AFL and NFL drafts.

In 1965, Piccolo signed as an undrafted free agent with the Chicago Bears. During training camp, Bears head coach George Halas made the decision to pair Piccolo with fellow rookie running back Gale Sayers as roommates. Piccolo and Sayers appeared to be polar opposites. The shy Sayers was an African American player who was the team’s first round pick. Piccolo was an undrafted free agent with a gregarious personality just hoping to make the team. The two running backs quickly became close friends. It was the first time in Bears training camp that a black player and a white player had ever roomed together. Piccolo impressed Halas with his work ethic and made the team as a member of the taxi squad–now known as the practice squad. His upbeat attitude was also an inspiration to Sayers, who would enjoy an amazing rookie season.

In 1967, Piccolo started getting more playing time while backing up Sayers and also seeing action as an undersized fullback. By 1969, Sayers and Piccolo were the Bears starting backfield. Piccolo was enjoying his best season until he removed himself from a game against the Atlanta Falcons. He was having trouble breathing. After an examination, Piccolo was diagnosed with embryonal cell carcinoma. In 1970, he underwent operations to remove his left lung and pectoral muscle. Unfortunately, the disease had spread to other organs, including his liver. On June 16, 1970, Brian Piccolo died. He was 26 years old.

Piccolo’s death was devastating for the Bears organization. Among the 6 pallbearers at his funeral were Gale Sayers and Dick Butkus. He was buried at Saint Mary Catholic Cemetery in Evergreen Park, Illinois. Piccolo left behind an enormous legacy, including a wife and 3 children. He is particularly revered in Broward County. The football stadium at St. Thomas Aquinas High School is named after him as well as Brian Piccolo Park in Cooper City, FL.

Piccolo’s story was captured in the movie “Brian’s Song”, starring actors Billy Dee Williams as Gale Sayers and James Caan, who played Piccolo. A month before Piccolo’s death, Sayers accepted an award as the NFL’s Comeback Player of the Year. During the ceremony a tearful Sayers final words were “I love Brian Piccolo, and I’d like all of you to love him, too. Tonight, when you hit your knees to pray, please ask God to love him, too.” 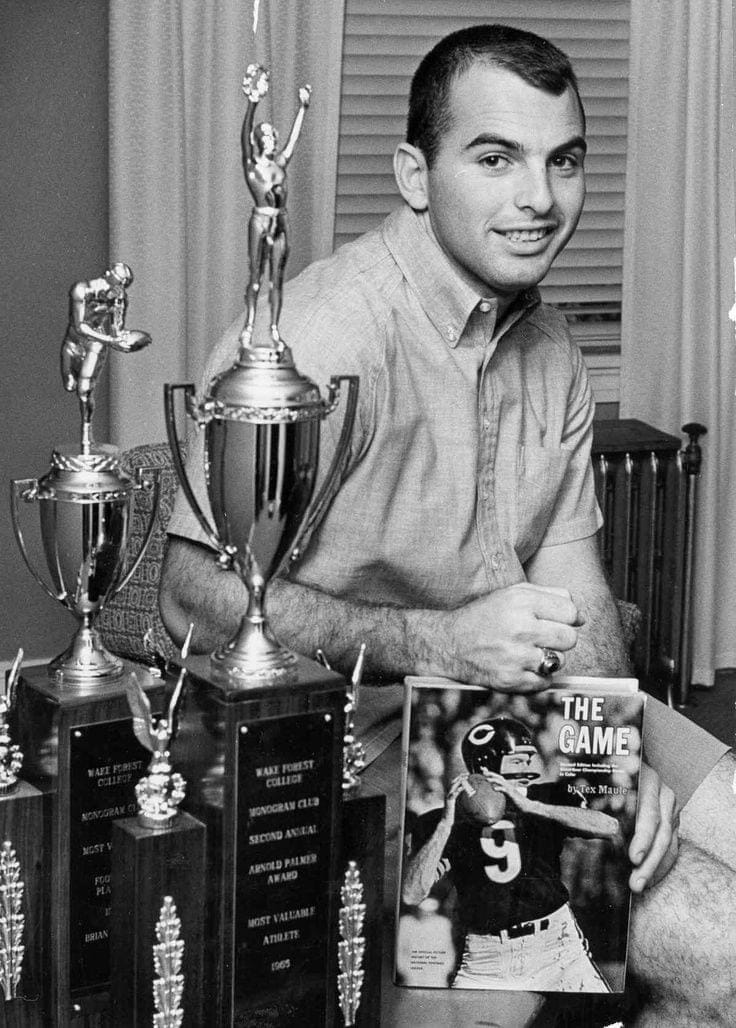