The Do Over with Karlyn Pipes of Kona 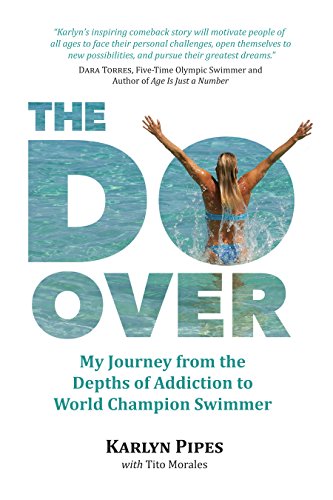 I WAS SITTING IN THE READY ROOM at the Janet Evans Invitational swim meet waiting for the finals of the 200-meter backstroke, surrounded by swimming royalty. On my left was Leah Loveless, who had captured gold and bronze medals at the 1992 Olympic Games in Barcelona. On my right was Nicole Stevenson, the Australian national record holder who had also won a bronze in Barcelona, and next to Stevenson was Lindsay Benko, the high school phenom with the bright future from Elkhart, Indiana.

A meet official came through the doorway and announced, “Okay, ladies. It's time.” We all got up and moved in single file toward the door.

As we emerged into the bright daylight of the McDonald's Olympic Swim Stadium and began to parade around the pool deck to the starting blocks, the speakers dotting the complex started to blare thumping, bass-heavy music. The spectators who filled the stands took the cue and rose to their feet to applaud, cheer, and whistle loudly in anticipation of what promised to be one of the most contested races of the afternoon.

I scanned the facility and tried to take it all in. The Southern California sky was vibrant and cloudless. The surface of the pool was still, and the lane lines were as colorful as sticks of candy. I felt the familiar pre-race nervous flutter in my stomach, the dryness in my mouth, and the warm tingling in my hands and feet. But mostly what I felt was a tremendous sense of gratitude. It wasn't gratitude for having performed so well in the preliminary heats, nor for having been steered into this beautiful sport as a child by my mother, nor even for having been blessed with a talent that offered me an opportunity to compete against these other skilled young women. I was grateful just to be alive.

When we reached our positions behind the blocks, I couldn't help but grin inside. At thirty-four, I was by far the oldest swimmer in the field. Some of the girls who had swum against me in the preliminary heats in the morning were young enough to be my daughters. Yet here I was, behind Lane 4 as the top seed, at one of the most important meets of the summer. I glanced over at Eric, my husband and coach, standing shoulder-to-shoulder on the pool deck with some of the best coaches in the country, including Stanford and Olympic coach Richard Quick. Earlier that day, Quick had approached Eric and said, "Karlyn had a nice swim this morning." Eric beamed. As I prepared to race, I flashed him a slightly nervous smile. The announcer began to introduce the swimmers one at a time, detailing a few notable achievements for each. The realization came to me that my path to the blocks on this day had been anything but normal and straightforward.

In contrast to the accomplishments of the other swimmers, my bio was, by Olympic standards, woeful. You would expect that, given my age, I would have had a fair share of swimming-related honors to report. When asked to prepare a media information sheet, however, I had struggled to come up with even a few items of note. All I could say was that I was from Coronado, California, and that I still did most of my training there. That was easy enough to jot down. What else could I add? Did results from U.S. Masters swim meets count? If not, I didn't have anything else to list; no major titles, records, or medals. Sure, I had plenty of stories to share, that was true, but the majority of my accomplishments were only tangentially related to competitive swimming. How could I possibly summarize the circuitous route I had taken to reach this moment? If they only knew the darkness I had survived to make it here. "If they only knew," I mused to myself, as the announcer introduced me. I gave the crowd a quick, sheepish wave.

The race starter, dressed formally in white, stood like a sentry on the side of the pool deck. He reached for the whistle that hung from his neck and delivered two rapid tweets, a nonverbal command indicating it was time for us to remove all clothing but our swimsuits. A second, longer whistle blew, meaning it was time to enter the pool. Because backstroke is the only stroke that starts in the water, the swimmers began to hop into the pool feet first, bobbing up and down a few times before rising to the surface and maneuvering themselves onto the hand grips underneath the blocks. I gazed down at the alluring, clear blue water, drained my thoughts, and jumped.

I Never Set Out to Become an Alcoholic

(Get and read the book for more.)

Karlyn Pipes is an internationally known inspirational speaker and the author of book, The Do-Over, a memoir about her struggles and victories with addiction. Karlyn also owns and operates Aquatic Edge aquaticedge.org, with the goal of teaching swimmers and triathletes how to swim faster with less effort by offering swim technique workshops worldwide, and private swim instruction and camps in Kona, Hawaii.

In June of 2015, Karlyn reached the pinnacle of her swimming career when at the age of 53 she was inducted into the International Swimming Hall of Fame (ISHOF) joining all-time swimming greats such as Janet Evans, Mark Spitz and Johnny Weissmuller. Twelve people per year are inducted from all aquatic sports including swimming, diving, water polo, synchronized swimming, open water, coaching and pioneer contributors. Since its inception, only 14 Masters swimmers have been honored.

Karlyn grew up in Chula Vista, California, and as a youth was coached by two-time Olympic gold medalist Mike Troy and swam with the Coronado Navy Swim Association. Karlyn was a standout swimmer winning the National Junior Olympics at the age of 15. Based on her speed, talent and ability, she was on a fast track to swimming stardom with the possibility of making an Olympic team.

Karlyn graduated from Coronado High School in 1980 and accepted a full athletic scholarship to attend the University of Arkansas. By 1982, due to poor grades, she lost the scholarship and returned to Coronado where for the next 11 years she established a pattern of being hired and fired from waitressing, bar tending and lifeguarding jobs and dropped out of college numerous times.

In 1993 at the age of 31, Karlyn found the courage to turn her life around and returned to the source that created so much pleasure and pain in her life, the water.

The rest is aquatic history. To date, Karlyn has established more than 200 FINA Masters World, 332 U.S. Masters national records and was named as one of the Top-Ten masters swimmers of all-time by Swimming World Magazine in 2012.

Karlyn has broken FINA Masters world records in all four strokes, the individual medley and in every distance. Her records stand the test of time and span twenty years and four age groups.

Karlyn also is the oldest person to set and hold an NCAA Division II record. At the age of 35, she accepted a full athletic scholarship to attend California State University Bakersfield (CSUB). At the championships meet she won three individual national titles (100 and 200 backstroke, 400 medley) and set an NCAA Divion II record in the 200 backstroke with a time of 2:00.54.

After Bakersfield, Karlyn returned to San Diego. From 1999 to 2003, she worked for Girl Scouts San Diego to  develop innovative sports programs for a membership of more than 32,000 girls and leaders.

Karlyn is professional speaker that offers both inspirational and technical talks. She has been a presenter at the American Swim Coaches Association (ASCA) World Clinic three times. From 2007 to 2012, Karlyn penned a monthly column entitled, The Pool's Edge, in Swimming World Magazine. Plus, she has been a contributor to SWIMMER Magazine and West Hawaii Today, a newspaper.

Karlyn's swimming technique is so efficient that Go Swim Productions created two instructional videos using her as the model. Go Swim Freestyle and Go Swim All-Strokes with Karlyn Pipes is available on Amazon.

When not traveling, teaching and speaking, Karlyn lives in Kona, Hawaii, and trains with the Kona Dolphin (youth) swim team. To contact Karlyn, email karlynpipes@gmail.com.

Karlyn loves to race but her true passion is teaching others how to swim faster with less effort.

She travels the world offering Faster Freestyle, Multi-stroke and Open-Water workshops to swimmers and triathletes of all ages and abilities. In addition, She offers open water Aloha Swim Camps and private lessons in her Endless Pool in Kona, Hawaii.

Karlyn is also an inspirational speaker who shares her come-back story with audiences of all ages. Karlyn also has published a memoir, The Do-Over, My Journey from the Depths of Addiction to World Champion Swimmer which received the International Swimming Hall of Fame’s Buck Dawson Award. 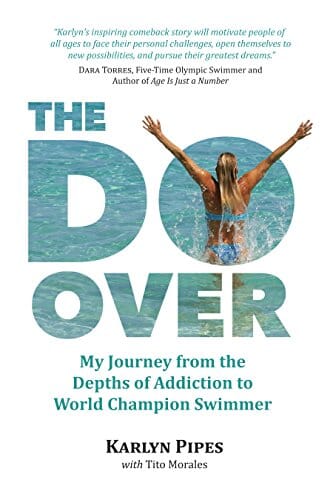