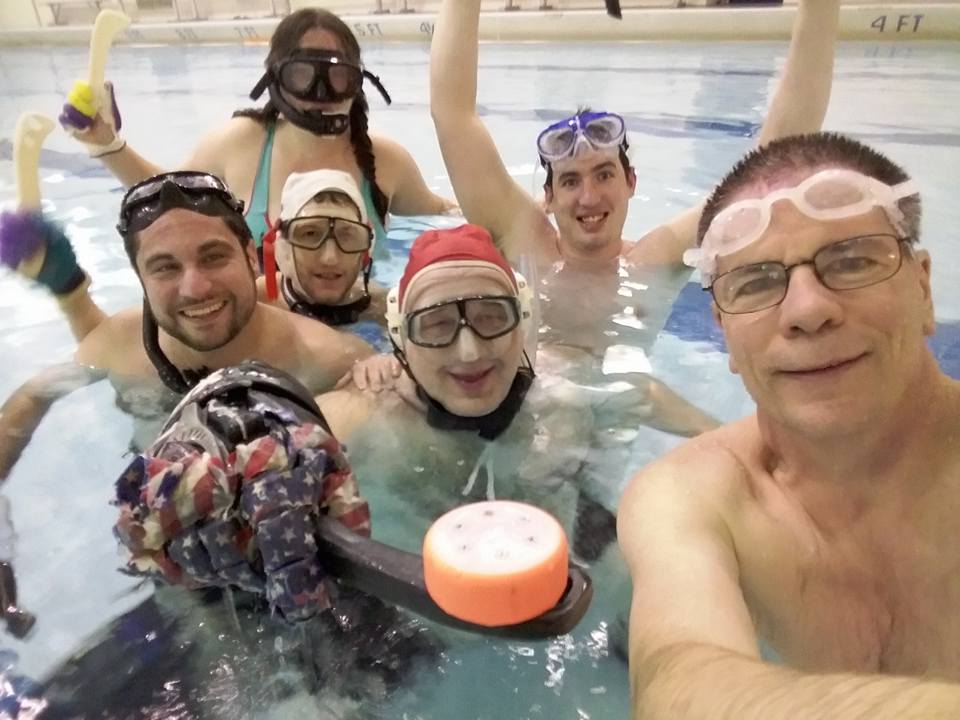 Dave is in the middle with the red hat holding the underwater hockey puck on his stick. Notice the glove on the stick hand has protection from getting bashed by other players or even from scrapes from the bottom of the pool. 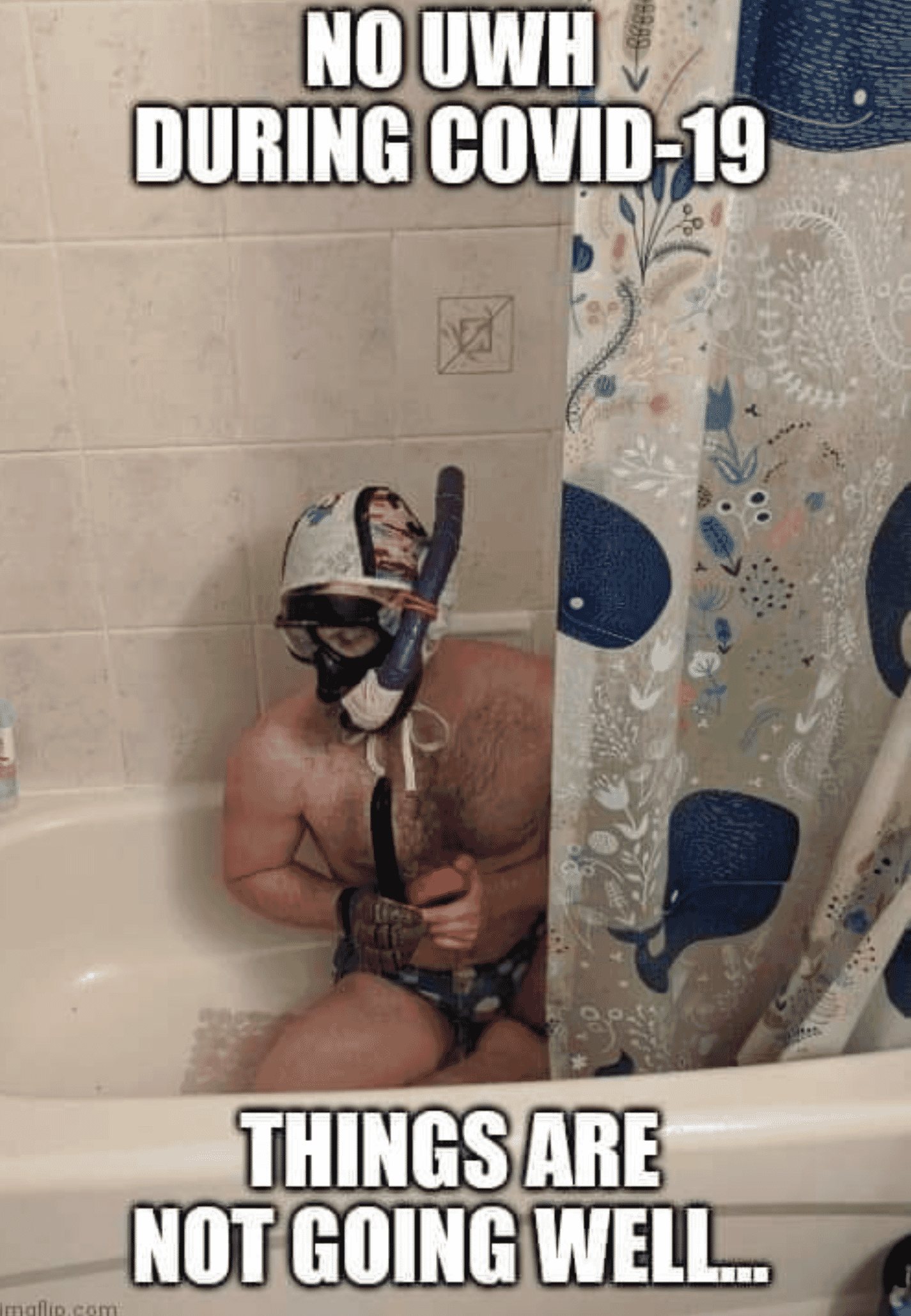 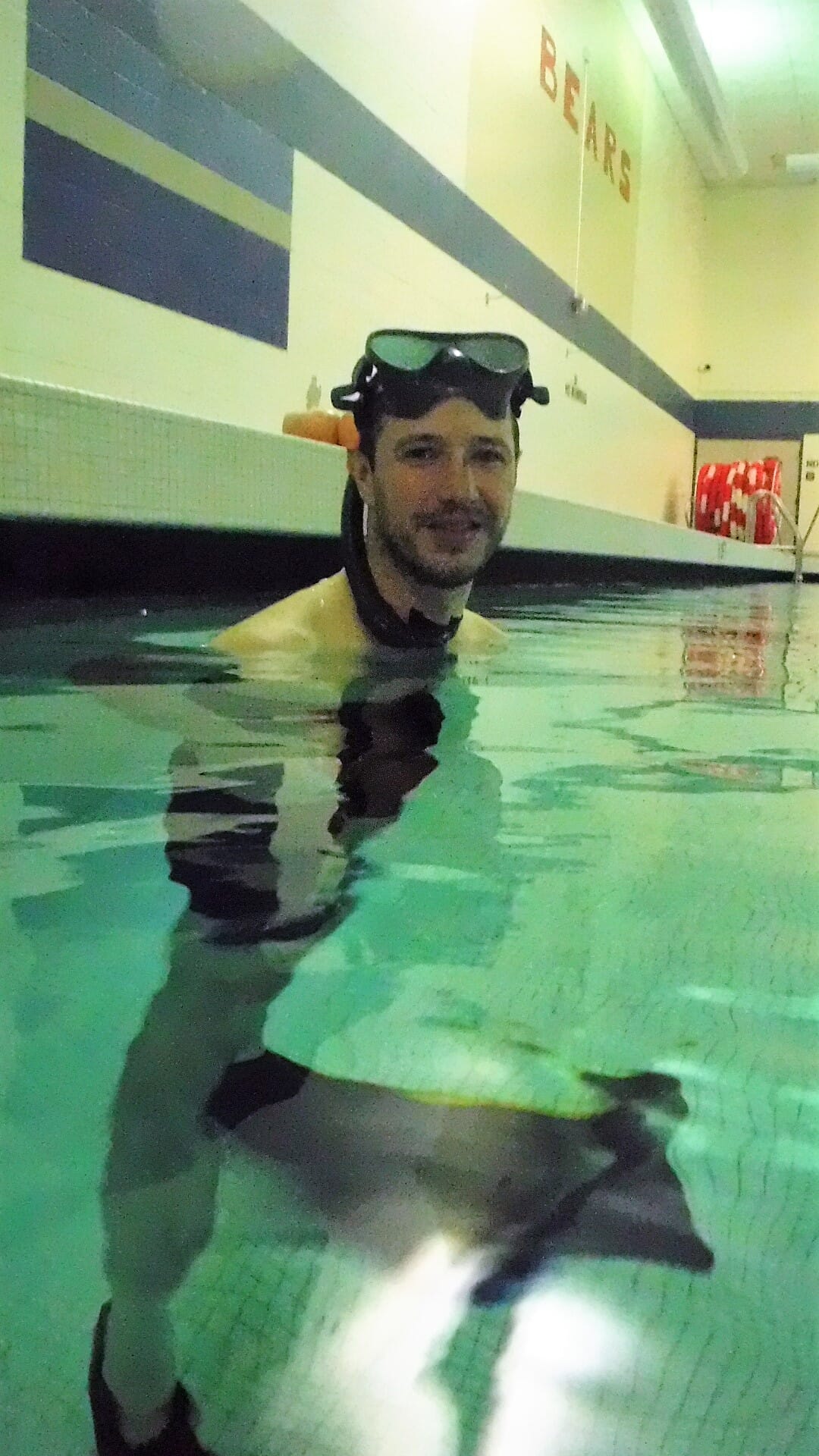 Pittsburgh’s club team is fortunate to have a number of experienced players who help to guide the practices and the team.

Article from the City Paper:

From the surface of the water, local underwater-hockey player Ben Holtzman says his sport “looks like sharks feeding.” Flippers splash water into the air as players chaotically circle a small orange puck. But under the water, the sport is graceful. Players slide across the pool’s floor like rays gliding along ocean currents, easily traversing the length of the pool with what appears to be minimal effort.

Underwater hockey traces its roots to England in the 1950s, when scuba divers invented a game called “octopush,” where divers pushed a small puck with flat sticks along the bottom of a pool as a means to stay active in diving during the colder off-season. Holtzman, a member of the Pittsburgh Stingrays Underwater Hockey Club, says that since its inception, the game has evolved.

Now, players wear goggles, snorkels and fins, and hit the puck with 12-inch hockey sticks. Games are six-on-six affairs and use an entire 25-yard pool as the field of play. To start, players rush to gain possession of a three-pound lead puck placed at the center of the pool. Holtzman, who also plays for the U.S. men’s national team, says players can typically hold their breath for only 10 to 15 seconds while in action, so they are constantly diving and resurfacing, flicking the puck 10 to 15 feet at a time. He says that this means the way to really succeed at the sport is teamwork, not holding one’s breath the longest.

“No matter how good you are, you can’t hold your breath forever,” he says.

Brittany Haughton, who has been playing underwater hockey for 10 years, says the game has many unique challenges. “Above the ‘Oh, God, I can’t hold my breath’ feeling, the game forces players to delve deep into their intuitions,” she says. “You can’t talk to your teammates while playing underwater.”

Guiz Besson has been playing since 2010. He excels at slipping by defenders, which has earned him the nickname “the eel.” The game is limited-contact like basketball, and Guiz says the Pittsburgh Stingrays’ play is less about competition and more about enjoying being in the water.

“It doesn’t hurt your joints,” says Besson. “What other sport could you say that about? There is no money in it; people just play for the fun.”

The Pittsburgh Stingrays are looking for members. They meet Tuesdays at West Allegheny High School, in Imperial, and Thursdays at Mount Lebanon High School, from 8:30-10 p.m. Play is co-ed and free to start; gear is provided and games are informal. Just bring a swimsuit and dive in.

After a summer of swimming and playing SKWIM, it is often a fun idea to have a special day to feature, learn a bit, and play underwater hockey. Get some equipment and support from the local players and mix it up in the pool, pushing the puck.

The dynamics are different. No sense in talking underwater. Fitness matters. Power works wonders too.