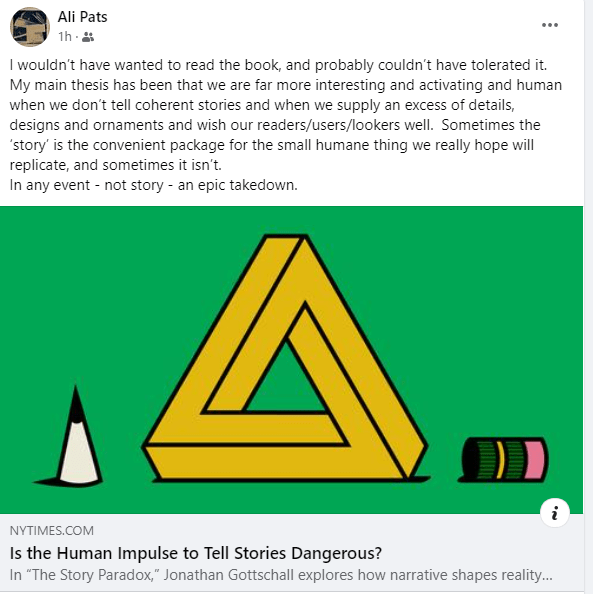 Is the Human Impulse to Tell Stories Dangerous?NY Times article

Part of the article:

It is a “considerable bother,” says Jonathan Gottschall, to write a book; he lightens the task by writing about himself and excusing himself from extensive research. He sets a memorable scene of a morning spent in the lounge of a college psychology department flipping through the indexes of textbooks. He concludes from this that no one has ever undertaken his subject, the “science” of how stories work. Eureka.

Gottschall, a research fellow at Washington & Jefferson College, tells us that “for as long as there have been humans, we’ve been telling the same old stories, in the same old way, for the same old reasons.” We live in “unconscious obedience to the universal grammar” of stories. In other words: We don’t tell stories, they tell us. And everyone is the same kind of storyteller, Jesus and Socrates and all the rest. The universal story hard-wired into our brains is, says Gottschall, one in which everything gets worse until it gets better.

This “universal grammar” doesn’t seem to fit the Book of Genesis, Norse mythology, Greek mythology, the Analects, the Rigveda, “Hamlet,” “The Brothers Karamazov,” “Madame Bovary,” etc. But that is the least of Gottschall’s problems. 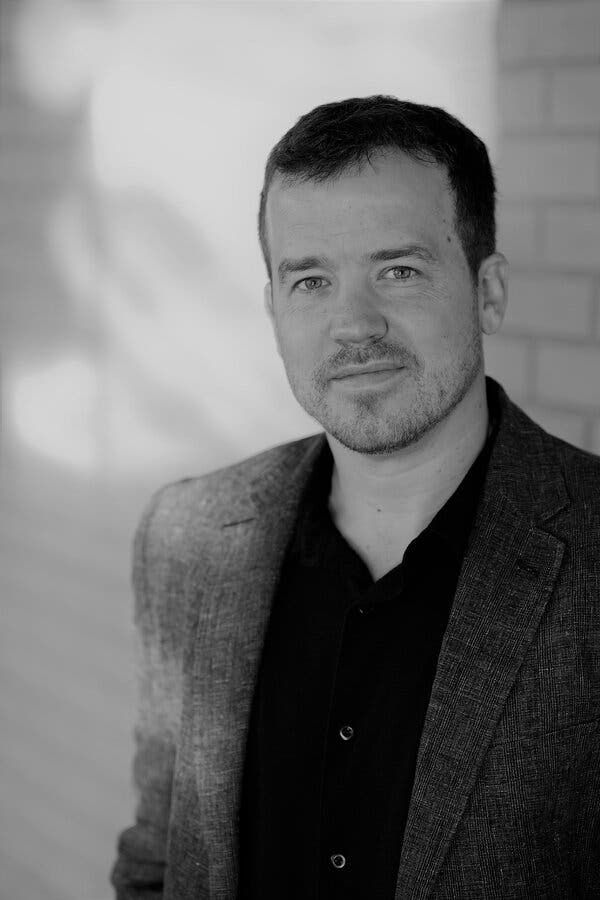 Little is original in his analysis. His notion that stories tell us arose out of the structuralist anthropology of Claude Lévi-Strauss in the 1950s. Philosophers have been hard at work on story; that goes unacknowledged. Gottschall does mention history and journalism, but only to dismiss them as elements of our culture’s storytelling “machine.” In this bonfire of the humanities, Gottschall frees himself from knowing what novels say, disciplines demand or traditions offer. His portrayal of Jesus and Socrates as tellers of stories is exactly wrong. They spoke in questions, riddles and parables, meant to refresh minds and souls. That spirit of inquiry is absent here.

Editors at The Times Book Review selected the best fiction and nonfiction titles of the year. Here are some of their picks:

So is the principle of noncontradiction. When it suits him, Gottschall cites examples taken from the very disciplines that he has dismissed. Right after a pungent section characterizing history as the useless projection of the present upon the past, he cites a book of history, because it says what he wants it to say. Again and again he does what he thinks he is criticizing: treating as evidence what supports his story, and ignoring the rest.

Gottschall dismisses uncomfortable realities by claiming that others do so. Psychology may not have much to say about stories, but it does have a name for that move: “displacement.” The operative literary term would be irony. Gottschall cannot be expected to recognize that. Literary terms such as “irony” do what Gottschall claims that no one before him has done: They allow us to distance ourselves from our stories by cataloging their devices. This is unfamiliar territory for Gottschall. He promises a paradox in his title, but none is forthcoming. He does not know the difference between a metaphor and a simile. When bungling the details of the Holocaust (who needs history?), he treats the reader to grammatical errors.

Continues on the NY Times site.

Counting Down the Tides (from The Moth)

Counting Down the Tides (from The Moth) 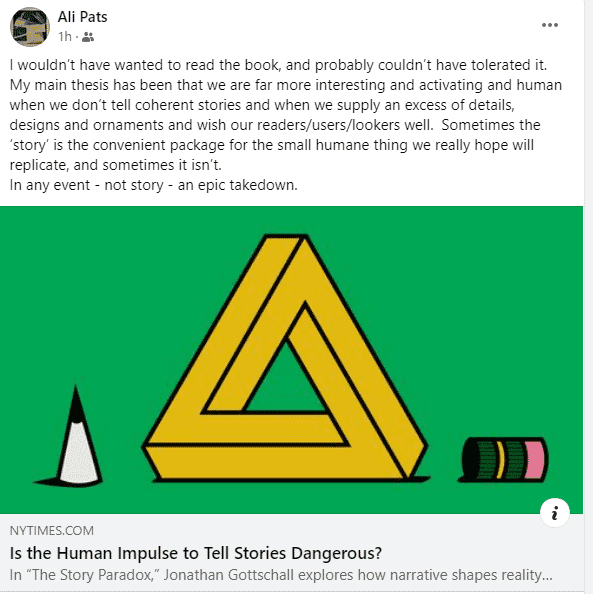